Antivirus is a software that was created to protect the device from malicious files (Virus) such as ransomware, trojans and many other types of viruses. The virus attacks a PC/Laptop that does not have security such as an antivirus software, there are some symptoms after your device is infected with this virus. 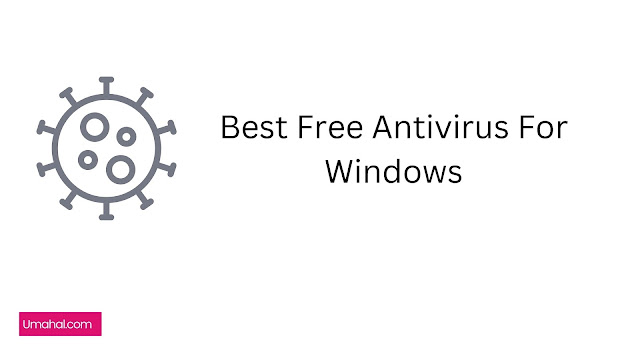 With the help this of an best free antivirus program, you can avoid the entry viruses and also updating your antivirus software so that your computer is always safe from viruses. You can avoid viruses by updating software, using strong password, avoiding foreign emails and not clicking on suspicious links.

Avast Free Antivirus is the best free antivirus for windows software to stop malware. This best free antivirus software is available for Windows, macOS, Android, and iOS. Their software received the highest marks from AV-Test, while SE Labs ranked third for the total protection they provide.
Protection from avast itself can detect unknown threats using a behavior shield. This feature can stop normal files from suddenly turning into malware that can harm your identity and data that is not backup on your PC/Laptop.
The free version of avast also has a feature to analyze WI-FI networks and issue a warning if something goes wrong, there is also ransomware protection for paid users.

Avira is one of the best free antivirus too, for the free version Avira uses an identical malware detection engine that has received top marks from AV-test.org and AV comparative, This product from Germany has a slightly less good performance, the achievement of the rating obtained is slightly worse than Windows Defender in the UK SE Lab report. (Source: ekrut.com)
Avira is available on Windows, macOS, iOS, and Android operating systems, so you can use this software to protect your device for free. What's great about this antivirus software is that you don't have to submit any data information even emails. Avira states on their website that it will never sell user data.

AVG Antivirus Free offers six different scan types (Device Scan, DVD/USB, Single File or Folder, and a Boot Time Scan). AVG is a company owned by avast, so these two best free antivirus products use the same engine and have the same level of protection. AVG has several protection engines such as ransomware, spyware, and also other forms of malware.
Apart from that, AVG will also notify you about unsafe web links and block unsafe email attachments. If you want to get more protection than this, you can use the paid version. Here you will get features like find my phone if your device is stolen by someone you can lock your device from the AVG  website this way the person who takes it not be able to use your device at all.

From some of the recommendations above, Microsoft itself also provides its own antivirus software which is already contained in the Windows operating system with called Windows Defender Security. Tis software is one of the best free antivirus that many people trust, so Microsoft Defender has expanded its services to other platforms. Microsoft often does software and Defender automatically adjusts to an equivalent level of protection. This program is built into Windows so it's automatically enabled by default to perform and maintain internet basics. You can also block unwanted apps and protect folders and files from ransomware attacks.
Next Post Previous Post
No Comment
Add Comment
comment url
NEWS,SOFTWARE